On the second assault of his solo project Protectorate, Kalle Lindberg fired away 8 blasting electro-indus tracks on the edge of metal in their structure but following production methods that might surprise you. Fascinating Kitchen Notes for an accomplished come back to the crossover sound of 90's with today's tools. 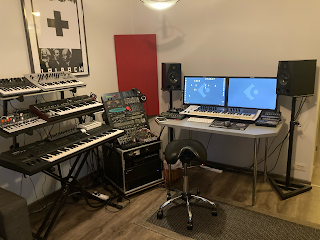 What gears/softwares did you use for II ?

I think my favourite is Cubase. All my hardware is setup as external instruments in Cubase, it's really convenient to be able to process the hardware synths ITB with latency compensation. The oldest songs on "II" I started to write in 2016 with maybe cubase 9 or something and I was able to finish the songs eventually with C11 without any problems, so the compatibility is good too. Arturia has those cool vintage sampler emulations which got used a lot on the album. The OPS7 is a really good DX7 emulation, I used it as a programmer for the Volca FM, worked really good together with a midi out mod installed on the Volca FM.

Setup is constantly evolving. Just recently after finishing the album I swapped the JX-8p on my setup to a Yamaha SY77. I also had to upgrade the computer because the motherboard died. With the new comp I'm hoping to be able to transition to 96khz as the MOTUs support it and the new comp has a second RME 9652 installed and working.

I use an multisampled acoustic drumkit layered under the electronic drum samples. It's mostly used for the room and overheads, also for the cymbals and toms. Theres a couple of sounds on the album from Arturia SQ80 from the Ensoniq Factory set for that vintage flavour. Theres some original factory samples from Emulator V and Fairlight V.

Most of the sound design I do myself. I mostly use hardware, those I program from the hardware interface, it's quick and inspiring. When I do use software instruments, I use my Nektar Panorama P4 mapped to the plugins so that's fast and hands on too.

I've seen some talk about the use of guitars on a couple of reviews of the new album and thought it might be interesting to elaborate on the matter a bit. There is very little actual electric guitar on the album, just a couple of lead guitar melodies in the end on the track Asymmetric, Lethe, Tribunal and Deathbringer. The kind of palm mute type of sounds are actually from MicroWave II ran through a amp sim. There's also distorted electric bass on the album, usually layered with a bass synth. Just to give it all a bit of grit and aggression.
Old Ministry (twitch-mind is a terrible thing to taste era) was a big influence on the album, so it kinda requires some chorus and distortion on the electric bass. I also used the Behringer K-2s ESP with a guitar to play some synth pads on a couple of tracks. It tracks really good for what it is. I also like the way that pitch becomes organic when using a string as pitch source for the synth.

Sometimes a have an idea beforehand but the composition always includes some amount of improvisation/jamming. Some of the tracks on II were initially written using an electric bass (Asymmetric, Teargarden) while on others a synth was used for the initial bass lines. I tend play every track (I do quantize though) in with a keyboard, drum pads or you know a stringed instrument, rather than programming with a mouse or step input.
I don't really have a structure in mind beforehand, I like to go where the track takes me, but I do have a somewhat of a rigid idea what a song structure can be, so this way I can avoid too similar song structures between the songs by not thinking ahead too much.

Do you produce/mix in the box or do you use mainly external gears (effect/comp/eq...)

My mixing is done In The Box using Slate Digital Virtual Mix Rack, Tape and Bus Comps. Every channel gets an instance of the Tape emulation and a console emulation followed usually by an SSL EQ (for cutting) - VCA comp - Neve EQ (for boosting). The Slate Distressor emulation gets quite a bit of use too.
For distortion and modulation I use D16 Silverline plugins and Arturia FX Bundle. Master Bus (Red), Drum Bus (Gray) and Vox Bus (Vari-MU) get a Slate Virtual Bus Comp each.

The hardest thing for me in the process is writing the lyrics. That takes most of the time. Other than that, at least with Protectorate II, maybe the final mix was a bit hard for me, but I think that it was mostly because I was kinda burned out by that point by all the work I had done for the album.
I guess there is sometimes a bit of a challenge when composing a track at the point where you have to come up with a chorus, but I wouldn't call it painful, the missing part just sometimes takes a bit of time to manifest.
Other than that, sound design is fun, arranging is fun. I tend to mix a bit early on in the production, so final mix is more of tidying everything up and giving the track the final 10%.I don't know if this is really a tip, but what has helped me a lot in the mixing department, was to try to kind of emulate an old school analog setup using the tape and console emulations. Mostly I think it adds a bit of distortion to every track, but it kind of reminds me how things used to work and sound when I was using a tape 4 track as a kid.
Another useful thing is to have as much physical control on synths when doing sound design. Easier to find sweet spots on synths with physical controls on hardware or software synths, doing automation is simpler and I get results before I get bored.

I don't know if this is really a tip, but what has helped me a lot in the mixing department, was to try to kind of emulate an old school analog setup using the tape and console emulations. Mostly I think it adds a bit of distortion to every track, but it kind of reminds me how things used to work and sound when I was using a tape 4 track as a kid.
Another useful thing is to have as much physical control on synths when doing sound design. Easier to find sweet spots on synths with physical controls on hardware or software synths, doing automation is simpler and I get results before I get bored.