Kitchen Notes : Pro Patria on Piercing Through the Armour

Switching from hardware equipment we could afford in early 90s with little money to a current complete virtual system, PVC comes back to production methods and tools for well balanced EBM we now can hear on the last Pro-Patria's Piercing Through the Armour album.
Anecdotes and technical details (but he still keeps a few secrets) that will remind things to those who one day cracked and bought a first synth with all the money they could save. 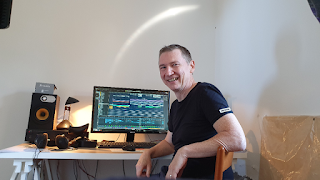 What gears/software did you use for Piercing Through the Armour ?

I used to compose everything on an old Roland D-20 keyboard, but nowadays I only use Cubase 9 with a number of plug-ins. I believe that digital instruments have become so good that there's no more use to invest so much money in real synths anymore, especially now there's hardly any money to be made anymore in the music industry.

To be honest? My D-20! People usually laugh when I say this because it certainly wasn't Roland's greatest keyboard, it being a downgraded version of the famous D-50. The D-series was also more the type of synths one associated with commercial happy-flappy music rather than EBM. In my opinion, it's not about which instruments you use but how you use them. On "Back to Basics", for instance, I drove the D-20 through an old guitar distortion pedal to create some amazing sounds. Most of all, the D-20 had a great internal sequencer which allowed you to create real songs with 8 tracks plus drums. Without it, making music would probably have been out of my reach and Pro Patria would have remained a distant dream.

Yes, of course. After 34 years it's only normal that you evolve. Our first CD "Quod Erat Demonstrandum" was recorded in a professional studio where the main instruments were a Roland D-70 and a Juno, coupled to a nineties Mac with Audio Logic through one of the first digital mixing desks. I still recall how impressed I  was when I saw those sliders move up and down automatically!
When I returned in 2017 I was all on my own and I only had my D-20, that pedal and an old Alesis voice processor. I bought Cubase 7 and quickly found some nice plug-ins to complement my setup. I've been a musician for all of my life but sound producing was completely new to me so you'll understand I had to learn a lot in a very short time frame. This becomes obvious when you compare my last 4 digital albums and the way that they were produced, from ignorant amateur to someone who's beginning to understand the basics.
As from "Executioner" I upgraded to Cubase 9 and with every new album I bought a new plug-in, so the sound of each of those 4 digital albums is largely designed by the plug-in I acquired for it.

Yes, I use presets but I tweak or even change them completely most of the time to get exactly the sound that I want. Most presets are nice but rarely do I find one that really nails it. They're a great help though to get started with sound design, which is a black craft in its own right.

Yes, of course! I'm not going to reveal all of my secrets here, but I can assure you that the two plug-ins that I use most are packed with my own creations.

Do you know which unlikely instrument we used during our first two gigs? The Commodore 64! It had MIDI capability and it produced some awesome sounds to layer on my D-20. Unfortunately it was too much of a hassle dragging it around, especially my dad's second television (black and white) to connect the Commodore to. I'm sure that he wasn't displeased when I left it at home afterwards.

Strangely enough, most of my music comes to me at night in my sleep. Then have to I rush into the bathroom in order not to waken my wife and record myself humming it. Most of the times, these ideas already come with the exact sounds and sometimes even words. They're just loose fragments, though, and the structure only appears later when I'm amalgamating all of these ideas into a (hopefully) coherent song. I improvise a lot actually. Most of my acoustic album was improvised on the moment of recording. I love doing improvised solos such as the one on "War (till the day we die)", that's one I'm particularly proud of. Unfortunately EBM isn't a style that allows a lot of improvising as everything has to be arranged with an almost military order.

I HATE mixing and mastering! As I said, I consider myself to be a musician, certainly not a sound engineer. Still I'm doing my best to mix and master everything myself because, apart from the money, I don't want to depend on others. This resulted in some painful experiences such as my first attempt at "Back to Basics", but I'm learning. Also sound design can be frustrating at times because I have the right sound in my head but sometimes I really struggle recreating that sound with my instruments. So, to answer your question, I definitely prefer the composing/arranging bit. It's there that I can unleash all of my creativity.

No tips here as I'm still learning a lot myself. More in general, an advice that I'd like to give to young, emerging talents, is to listen more to your heart and less to your idols.