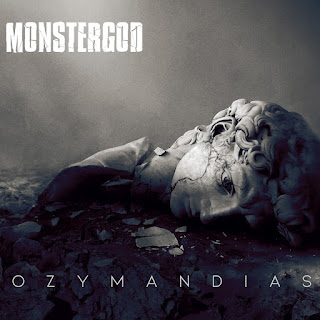 The big surprise these last week has been to see the release under a mainly synthpop label (Space Race Records) of an excellent dark/electro industrial album with wide metallic influences.
Monstergod gives us informations on the tools and never really fixed composition methods used to produce Ozymandias (there is a mystery remaining I'd like to clarify, though...)

What gears/software did you use for Ozymandias ?

I used a lot of different software and hardware:

Software: it's hard to name it all but I used Logic Pro X as DAW, a lot of different virtual synths lika ANA, Some of Native Instruments like Massive or FM8, some from Arturia's stuff like Pigments or MiniV. I also used Korg VST like Monopoly or Wavestation. And of course a lot of different effects.

All the time :) I change the gear when it's possible. I have a rule that if I do not use particular gear for more than 6 months, I should sell it.
But it's sometimes confusing, because from time to time I feel that I made a mistake, that's why I had 3 different Viruses all, I bought 2 or 3 times Roland SH201 or Novation Ultranova.

Sure, it's one of the easiest ways to start working on a song. But I tweak them to sound as I prefer.

Rather not. I want to make songs fast enough to not forget the melody or music ideas I have.

I have a few different methods. Sometimes I start with drums/percussions like in a song called Beloved. Or with guitar as in Subdreams.
Of course, I check some presets on VST/hardware synth and some ideas come to my mind. We could call it an improvisation.

I try to build 3,4 "stages" and then arrange them in a song - intro, verse, chorus, bridge etc. After that I try to add additional instruments. Sometimes I kill the tracks I made at the beginning. The process is never obvious and can be changed. The most important thing is to have a song at the end.

I like to create, write and arrange songs but mixing is sometimes terrible. That's why I usually work at this stage with mixing/mastering professionals.
On Ozymandias I worked with Filip Hałucha from Heinrich House Studio. I found him on the Internet, I checked his previous works and I knew it would "click".
He's a great listener and great musician (played in Vesania or Decapitated). He also suggested that I could record real drums with his friend Daray, known from Dimmu Borgir, ex-Vader etc. It was a great experience to see how these 2 guys work together. Fast, professional, and all the best words you can imagine.

Filip asso added some additional synth layers, bass sounds or reamped my guitars. So he was some kind of co-producer of this album.

Some of my friends ask me to listen to their new songs at the production stage. Some of them are good, some of them are bad. But it's my particular feeling. I rather prefer to answer questions about mix, or general sound than talking about feelings. In my opinion we shouldn't do it. Making music is a part of your soul if you share it and listen to what people think about it and try to tweak, change the song before they, not you, think in a different way - that's bad. I think that many music productions are almost the same. Of course we all are under some music influences but the case is to give to your music as much heart as it's possible to avoid creating copycats. So my tip is to focus on what you want to do, not what others think you should.