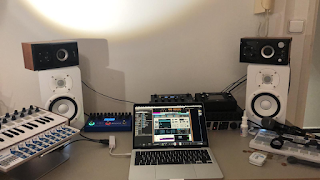 The Opposer Divine recently rewarded us with an almost instrumental album full of rich sonic textures with INSTRUMENTALCODE.
Boris Mutina has been kind enough to provide us more details on the conception of his music and it is surprising to see how much Reason is the DAW behind a lot of Electraumatisme elected albums. Not cheap with details, Boris revealed us many stories and advices about building good music. My thanks go to him

Hey, thanks for reaching out. I am a loyal (former Propellerheads) Reason Studio user, started with Reason 1 already. This album was drafted with versions 9.5 and 10 on Windows, finished on Reason Suite 11 on Mac. Also, I've used Apogee Duet or Tascam US16x08 sound device hooked to Yamaha HS5 or AKG headphones, and Arturia, M-Audio and Korg midi controllers. On this release you can hear DSI Tetra, ModDevices Mod-UI and Dexed from Zynthian, Novation Xio-synth and Bass Station2, Alesis Micron, with effect devices from Mooer, TC Helicon and Behringer.

As for the software tools, Hysteresis/Fracture are perfect as well as all effects from Valhalla. In Reason I still like to use Subtractor, from the new additions, Polar Dual Pitch Shifter is the beast with sampler-like capabilities, and from the 3rd party rack extensions IVOKS - software remake of famous Polivoks.

When it comes to hardware I'd like to mention Mooer Ocean Machine guital pedal as a game changer for me, still having so much fun with that. Even though it's a guitar pedal, its characteristics allow to create new-age-like ambient sound (for example, when I am using it with Yamaha Tenori-ON), or, when used with dirty aggressive sounds from Bass Station2 or Tetra I am able to generate sounds of demons slowly marching burned Earth. Another fav piece of gear: I've already mentioned Zynthian: a small box that contains multiple software synths, such as ZynAddSubFX, FluidSynth, or LinuxSampler, and supporting LV2, but that's not all. Its greatest value is in the Mod-UI from Moddevices (LV2 compatible, again). This allows you to take a software sound generator from exhaustive library (or, in newer versions, use the audio input), patch it with variety of effects, or software stompboxes and have your sound. Yet, I am talking about software but Zynthian is a Debian Linux powered Raspberry, with high quality sound device that has MIDI, any USB midi controller can be connected and used with it, and it has WiFi, so don't need to modle on a small screen, just connect to its web interface and do everything there.

Yes, for the new material that I am already drafting, the elements are being done in Reason Compact or Reason Figure, I've upgraded to Reason 12. I am considering to add few more guitar pedals into the signal path as they have different sound from what the software is offering, they're more suitable for jamming from which I am getting now the major part of the inspiration. I am going to make use more of Arturia Spark for more glitchy sounds. And I am planing to get newer Zynthian with audio inputs, getting the new Apogee Duet3. And maybe get again a bass guitar.

Sometimes you need to use presets, I am trying to understand how they are built, from time to time tweak them, send their sound through some effects. At the end: what would be the point of recreating the preset from scratch to achieve the same sound the preset already has? Few fellow musicians argued with me couple of times that I've used presets or sampled sounds they recognized. Yes, and? They fit the best in the track, so why not?

I am trying to. Since Reason is in fact one big modular synth with mixer and sequencer, it is incredibly easy to come up with the most impossible routings that create good sounding results. Back in days I've been watching Mick Gordon's explanation on how he designed the sounds in the Doom soundtrack. He said, if I am not wrong, that for particular sound he splitted the basic sine wave into 4 different insert effect chains and then summed back the signal. So I've tried that as well and found that it's incredibly easy to do that in Reason. In addition, looping the signal through wiring was never easier, you don't risk the damage of any equipment due high signal. It's hard to say which my fav synth or plugin. In this period, delays and reverbs with a slight tube or tape, or saturation, can save the result from being deleted.

Some time ago, in the morning, I woke up and decided to "drone" a bit before going to work, then I've just turned down the volume knob, but not to full mute. Obviously, that evening I forgot that I was doing something in the morning. I was finishing my work from remote, just few emails etc but still was nervous about the deep low level hum coming from somewhere. I was checking all devices at home: fridge, microwave etc, I've checked the bathroom for possible water leak, almost killed my neighbor, but still didn't found the source. Tired as hell I went to bed, and after midnight, exhausted from insomnia caused by that hum I've finally realized that it's the Ocean Machine playing still the recorded loop and effecting it in a completely different way.

There's no "golden template" I pull out and use it. Sometimes I just want to jam with the gear, explore the sound, or I grab the phone when in the subway and play with Figure (amazing tweaking capabilities, leveraged by poor exporting options). I create a bunch of stems, label them with root note, tempo and signature, save them. Then, when something looks like "this could be a track", I dig through the stems, and add them into the track, if it matches somehow.

Moreover, this genre we love, doesn't use many chords, melodies became rare, the tracks are being created as monotonous bashing and screaming. No offense to those who do it like that, these might be perfect songs as well, yet, I like to add some chords, melodies if possible. If you take a while to listen the last album INSTRUMENTALCODE, especially to the track Prophecy, chords and melodies in the chorus are in fact the essence of that song. A different thing can be found in track called EEE: kind of monotonous rhythm can be heard through the whole track and peaceful purely electronic chorus is then smashed by heavy trash guitar after-chorus sequence filled with almost cacophonic detuned chords. And completely different thing is the first part of Exorcism/Antivaxer, this is hardware synth/microphone thing created from a jam session, believe or not: all in two audio lanes.

Reason did an incredible step forward, so you can do everything at once inside one software. Mixer console is good, better compressors are implemented. Reason's mixer just makes the process much easier. Mastering is something that I don't have in my hand still, most likely because I am deaf to my own creations. My brother Thomas has better ears, exceptional skills and helps me with mastering.

No idea. Mixing was the pin in the ass for many years for me. But I've already found a good method that simply works. I believe the sound is getting better. And enjoyable step? When I consider Yesterday's work still good.

1/ I think, that one of the most important things I've learned over the years is to start always from scratch, no templates.
2/ And another tip provided many years ago by my brother Thomas is: less is often more. If you struggle for a nice complex sound, you can have it: but too many sounding elements bring chaos, confusion, it's almost impossible to mix such things. Less instruments sounding together allow the complex sounds to pop up.