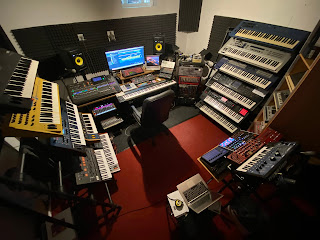 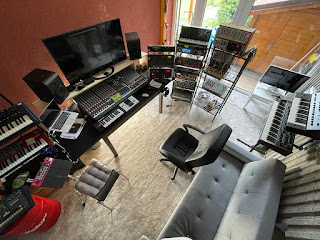 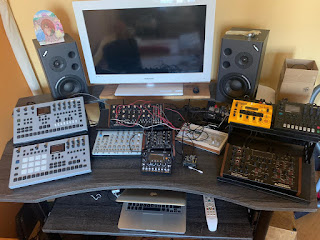 Today, I'm very excited to publish these special Kitchen Notes because they come from Eclipsed, project from which the last album Holyiens twisted by brain and is still spinning in my player.
Also I'd like to warmly thank Keyhead, also behind KIFOTH, for the time he took to answer the usual questions and compile additional information from his other bandmates.
At they end, here is a feast of informations that lift the veil on how the magic happened.

How did you manage to get such a precise and clean mix despite the huge amount of different sounds playing at the same time ?

Bob : We always tend to push a lot of sounds into each song.
Many musicians think that if something is wrong with the overall sound, it needs to be added something to the mix – like boost more eq or any fx`s plugin. But this is a big mistake.
It needs to be remove all unnecessary things. Today's technology allows a lot, but there is still a limit to which we must fit - a headroom.Therefore, it is better to remove and remove mainly frequencies that are not heard or fill the space unnecessarily.So I perceive this as the basis and assumption of a good mix. Then it's just a game with dynamics and space, but it's just a final tweak.
Another important point is to maintain gain staging throughout the mix and signal chain.
Anyway the important thing is that the song sounds as good as possible when composing and then arranging. I mean that each sound / preset should be maximally tuned / produced, correctly set ADRS and filters already from the source and also well recorded to the DAW.

About the mastering, it sounds to me that it sometimes hits hard in the limiter but at the same time you managed to keep a very good overall and various dynamic all other the album...this is still a mystery to me. Any trick on that ?

Bob : Mastering was done to us externally and I don't know that guy. For me, it's average quality mastering, I wasn't very happy because he tend to add too much bass. But I think the trick is in what material is ready for mastering - final mix. What is very important is what I described in the first half of the first question. Maintain a maximum -6dB headroom. But that doesn't just mean a 6 dB reduction on the master fader. This means that the master fader is at 0 dB but the signal from the mix has a maximum value of -6 dB in the peaks. Then the work on mastering is comfortable and the mastering engineer has more space for dynamics and today so popular loudness wars

Keyhead : See our studio setup below. We are producing and recording in 3 different studios. The gears marked with asterisk were used for Holyiens album.

Keyhead : Favorite is always the latest toy we got, but many of gears we have on stock has their own style and uniqueness . Once you producing a track and you have some image in mind how should sounds, that you may be sure that you get from our stock that piece of gear what sound you expect.
I’m personally not looking for exact instrument, but thinking more about character of sound. Than when I look for bass it’s Moog or DSI, once I look for string it’s Roland and Yamaha. Korg and Waldorf are textures for me. All crazy punchy staff and glitches are modulars and Electrons. Nord lead and Access virus are very universal and great for layering of real analogues.
For VST the Heavyocity staffs are my favorite for beats and noises.

Difficult to say from point of gears. Let’s say more fundamentally as way of working.
As Eclipsed project is quite new, but we are doing lot of other projects.
Bop,Solo,Blazena has projects Samhain, Last influence of brain as main projects.
My basic is Kifoth, and we are cooperate on Mindscape, Eclipsed and then supporting others for example last album of Vanessa.
As way of working we started on Commodore Amiga NoiseTrackker and later go through Octamed on Amiga , and move to Fast-tracker and again Octamed on PC.
With Octamed we used hardware of course starting.
Later on we move to Reason where we made first Eclipsed release and last 2 albums we made in Cubase with lot of hardware staff and heap of VSTs.

Keyhead: I never doing sound design from scratch for instruments as bass , arps& pads . All the time tweaking presets. This mean that I like the synths with lot of knobs as Waldorf Q or Sub37.  I hate diving in digital menu and trying this and that. Many times I tweaking real randomly, turn this, turn that without any workflow and logic just hear what happen.

In real analogues instruments no choice just start from scratch of course. That is majority of glitches, blips and effects you hear on Eclipsed sound.
I personally like a turning knobs on MS20.

Keyhead: Workflow of Eclipsed project is very specific on this. We are inspired by sound mainly. Solo turns and records lot of interesting modular sounds/noises and makes some basic rhythm lines and glitches, then pass them to me. I try to make some basic melodies and complex drum loops, plus some arps from my kitchen and speech samples. Than pass to Bob who is adding lot of structures and effects. He’s making production and mix for Eclipsed, so I like his tension in graduation of tracks. Bops adding lot drum fills and breaks. Make lot of layering to create dynamics. But in the basic everybody make improvisation on track/project he received.

Bop uses both. External effects and gearsand VST as well.

Most painful is mastering, no doubt .Not as a job ,but to create sound character which fit and like all people in our group 😊

To create interesting tune you should try everything with everything. Apply effects on single melody. Turn the knobs all the time during and recording. You can cut the recorded sequence to short samples and arrange new sequence from that particles. If is not good enough, then layer with other sounds.