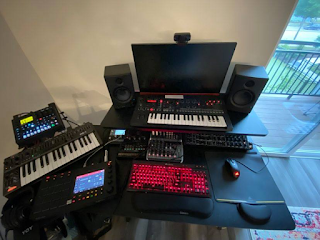 On all my releases I have used the Akai MPC Live for sequencing, sampling, drum programming etc. as well as using the onboard synth/FX plugins that it has included in it. Apart from that I used the Elektron Digitone, Waldorf Blofeld, Behringer MS-1 and the Roland JD-Xi on my first EP, and then added the Korg Volca FM and the Behringer Pro 1 for the 2nd EP, and this is the setup that I also have used for my upcoming release other than that I have started using ableton and VST's for some aspects in my songs now.

One of my favorite pieces of gear (that I very much regret selling) Is the Kawai R-50 drum machine. Something about the grittiness of the sounds I feel pairs very well with my overall sound. I ended up getting rid of it because of its extremely limited internal memory, and it was inhibiting me from writing any more songs! I sold it to get the last amount of money I needed for my MPC and have just used the samples from the R-50 since, although the samples don't sound nearly as good as the real thing, so I have contimplated buying another one! Another one of my favorite pieces of gear is the Alesis MMT-8 Sequencer.

Before I started putting out releases my setup was pretty much the same for a good while, but I have since sold a lot of it. I used the Alesis MMT-8 to sequence everything, an Alesis SR-16 for drums (and then the Kawai R-50), a Korg Electribe Sampler 2 for sampling, a Korg Monologue, and the Roland JD-Xi. The only thing I have kept from my first setup has been the Roland synth.

Yes. I don't believe in elitism about being the kind of person that creates all of their own sounds. I am definitely able to create sounds, and a decent amount of the sounds on my releases are sounds that I created, but I definitely do just straight up use presets or tweak presets that I like all the time.

Yes I do! I very much like creating sounds on the Waldorf Blofeld and the Elektron Digitone, they are both very powerful machines that have had a big learning curve but I've managed to get to the point with both of them that I can make sounds that I like. I also very much like synths without patch memories like the Behringer MS-1 (an SH-101 Clone) because it really helps you learn about functions of synthesis and patch creation, and is what I would recommend to a beginner.

I always start with either drums or a bassline, and then structure the rest of the track around it. I never have a structure in mind when I am first writing a track, I just mess around until I get an arrangement I am happy with.

I produce and mix my tracks entirely in Ableton 11.

The most enjoyable part to me is most definitely the arrangement, after getting the sounds that I want to use sorted out, I enjoy challenging myself every time I write to improve my work. My first recording was very minimal, and then the second was an improvement, adding more elements overall, and with my upcoming release I feel like It is another step up. It definitely is a balance though, you don't want way too much going on in a track.

The most painful thing to me is probably mixing as it is a very delicate process with lots of checking your mix in your monitors, and then other speakers, and then in the car and so on, and then making the smallest of changes to sometimes just a single element of a track. it is very tedious but what I do enjoy about mixing is that I seem to learn something new every time, and that makes me happy.